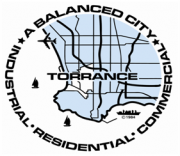 The City of Torrance, located in Los Angeles County’s South Bay, borders on the Pacific Ocean and beach communities to the west and the Palos Verdes Peninsula to the south. Ideally situated near the 405
(San Diego) freeway and twenty minutes from the Los Angeles International Airport, Torrance occupies 21 square miles, including a ¾ mile stretch of beach and the Madrona Marsh, a fresh water habitat. Torrance is within a 45 minute drive of many of Southern California’s major attractions.

Incorporated in 1921 and chartered in 1947, Torrance has a population of 147,405 and is the 8th largest city within Los Angeles County California. Due to its large employment base, the community’s daytime population is significantly higher than the permanent population peaking at 200,000.

The area enjoys a pleasant year round climate with moderate temperatures, gentle sea breezes and low humidity. The City boasts 31 parks on 350 acres of parklands and open space. The 500 seat James Armstrong Theatre and the “theatre-in-the- round” Nakano Theatre within the Torrance Cultural Arts Center Complex are excellent venues for both professional and local productions. Helping to round out the community’s cultural offerings is the nearby El Camino Community College campus that houses an art gallery, planetarium and a 2000 seat theatre.

The community’s population is culturally diverse as shown by the school district’s estimate that its students speak over 80 languages. Contributing to this diversity are world class international companies such as American Honda Motor Company, Robinson Helicopter, and Panasonic which call Torrance home. Four major shopping centers are located in Torrance, including the Del Amo Fashion Center, one of the largest shopping centers in the world and currently undergoing a significant expansion and renovation.

Overall, Torrance is a quality of life oriented community that offers a wide variety of entertainment, recreation, cultural and volunteer opportunities.

The City of Torrance is governed by the Mayor-Council-City Manager form of government with an elected Mayor and six Council Members who appoint a City Manager, and a City Attorney. City Clerk and City Treasurer are also elected. The Executive team works under the direction of the City Manager based on merit principles. Torrance is a full service city with an annual budget of approximately $200 million and a staff of over 1300 organized in 13 departments.

Email me jobs from City of Torrance, CA